New research on the gender pay gap for graduates suggests that neither choosing a specific degree nor graduating from a prestigious Russell Group university leads women closer to the salaries of their male counterparts.

The research conducted by the Higher Education Policy Institute (HEPI) entitled 'Mind the (Graduate Gender Pay) Gap', released today, sheds new light on the bleak outlook for women in early careers, and includes information that could indicate how the gender pay gap widens as women progress through their careers.

The conclusions reached by the study support those of student-focused market research firm Trendence, which found that women are paid less than men in their graduate careers across the board – regardless of factors such as university attended, degree subject, academic record, socio-economic background or race.

‘We’re really excited about the findings of this HEPI report, as our national data at Trendence has been pointing to the expectation gap between male and female students for some time,’ says Dasha Karzunina, head of research at Trendence UK and Ireland. ‘There are many differences that should be explored, as should the links between them, so that we can ensure female graduates truly have access to the same opportunities as males.’

Delving into the stats from both the HEPI and Trendence studies, we can take a look at the bigger picture behind female grads’ career journeys.

According to HEPI research, in terms of academic attainment women achieve better degrees than men and enter higher education at a greater rate (just 44% of entrants into higher education were accounted for by men, despite making up 51.3% of the 18-year-old population). So, academics would appear not to be the defining factor.

Trendence research suggest that the high level of achievement doesn’t necessarily equal high confidence. As part of its huge survey of more than 74,000 students across the UK, Trendence asked graduates about their career experiences. The results found that over the course of their university life women are less likely to believe that they have developed employability-enhancing skills (such as commercial awareness, data analysis and technical  skills) than their male counterparts. 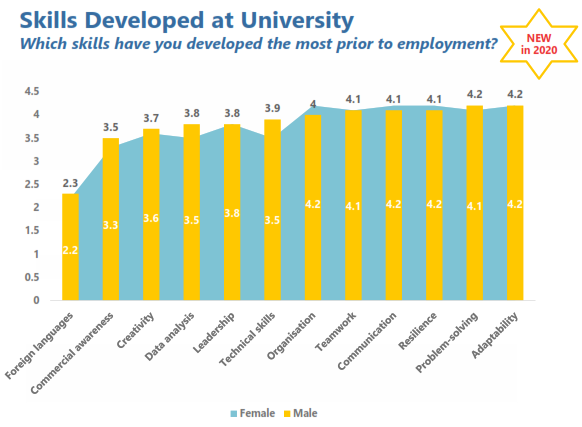 One possible interpretation of this is that women are more inclined to apply only for those positions for which they meet every requirement in the job description and feel sure about their ability to carry out, whereas men may be more confident in their potential to learn on the job.

During the application process

Already applying for fewer positions, the application process itself can often cause uncertainty as well. Women are still more inclined to drop out at particular stages of the recruitment process, with the Trendence research showing a higher drop out rate among women during online numerical or verbal reasoning tests and games-based assessments than men.

Despite, or perhaps because of, the higher drop out rate, the HEPI report suggests that women are more likely to be hired for a job once they have been interviewed. This suggests that being more cautious, and more selective (ie choosing the positions they are more suited to and gauging accurately whether to continue with an application or not), can work in their favour. The report also points to stats suggesting women are more likely to spend longer working on each application; this time spent perfecting and tailoring applications might point to less self-assuredness, but it’s also more likely to result in securing a job.

Expectations: men are less likely to settle for ‘second best’

Men appear to be more selective when taking jobs, but are less likely to be employed 15 months after graduation. The HEPI report shows that women are more likely to be in employment 15 months after graduation, but are more likely to take up part-time work. Men are more likely to give up a job offer in favour of a ‘better’ alternative, often at a more prestigious company. This implies a level of risk taking that was anecdotally found by the editors on TARGETjobs when interviewing legal professionals and aspiring lawyers. There was a perception among female graduates that a job with a solicitors’ firm, with an established set of values, job security and overarching umbrella of protection was more attractive than the riskier, potentially more profitable, unknown of self-employment as a barrister.

Women have lower expectations of their employers when it comes to pay. The HEPI report looks to the Bright survey, which shows that male students expect 13% more than women as a starting salary. This is more than the ‘official’ gender pay gap, and the report states that ‘the gap between expectation and reality suggests that men are being unrealistic’.

This lack of realism may lead to more men taking chances – with few succeeding and many failing – than women, which would account both for the higher pay but also for the larger unemployment rate among male grads 15 months after finishing their degree.

When we add the lower confidence women have in their employability skills to lower expectations of pay and an applied, cautious realism over applications we are starting to paint a picture of the differing application processes and career choices that separate the genders and may influence (though is not by any means solely responsible for) the gender pay gap.

‘We know that females have some of the lowest salary expectations across the board, even when we account for other demographic factors such as race and socio-economic status,’ says Dasha. ‘We also know that females tend to have lower confidence in their skills and have different expectations of their employers, particularly around company values, CSR and inclusion.’ 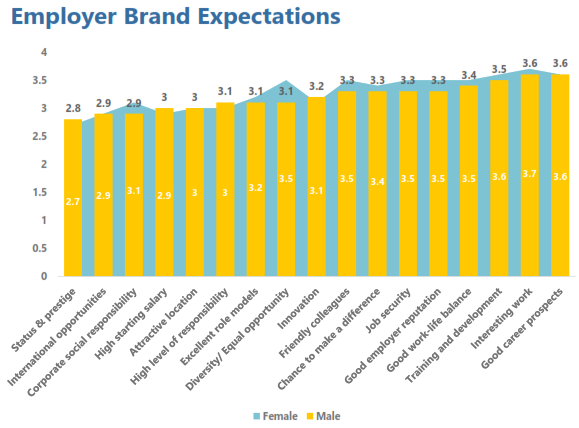 The HEPI report echoes these different priorities, citing a previous survey that found that – in defining a successful career – a significantly higher proportion of women than men valued being happy and fulfilled in their jobs, doing something that had a meaningful impact on the local or wider community and finding their work interesting. In comparison, a high salary came out as important for 42% fewer women than men.

Although it can be argued that women are being more realistic than men (and that women are paid less than men – so having this expectation makes sense), it also inevitably means that they are likely to settle for less in a given trade-off of values – even if an employer might have offered more if pushed.

This article has made much of the comparison between the levels of female and male confidence when it comes to abilities and expectations of employers.

If we accept the fact that women might have other priorities when making career decisions – and that these may compete with salary in importance – we believe there are two further important reasons behind the fact that women are less likely to expect a high salary.

The first is low confidence in employers to offer this, if only because the gender pay gap continues to exist. The second is low confidence in their own abilities – which as we can see above is reflective of a higher level of realism than their male counterparts (eg making applications to jobs they’re more likely to secure) but can mean that they settle for less than they should expect and could have gained.

The remedy then, aside from an absolute abolition of the gender pay gap overnight by some unknown force, is much as both HEPI and Trendence suggest: to continue to report on the problem openly and publicly, from graduate level to board level, and to explore any links we find in this information until there is equal opportunity for women throughout their careers. 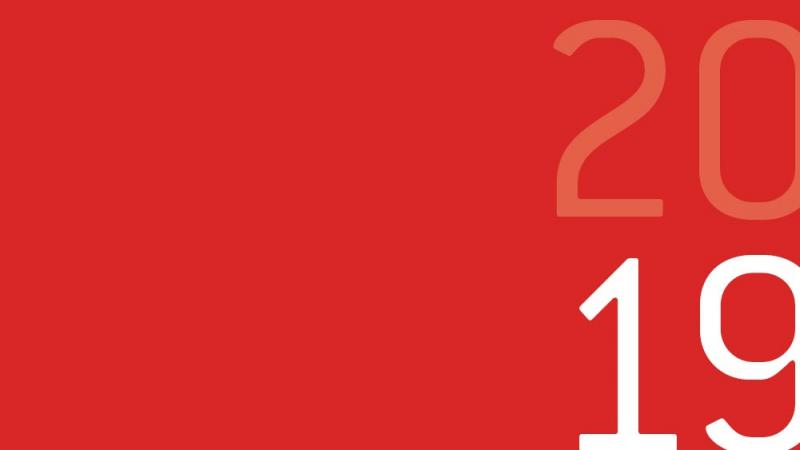 How are A level students feeling about their futures? 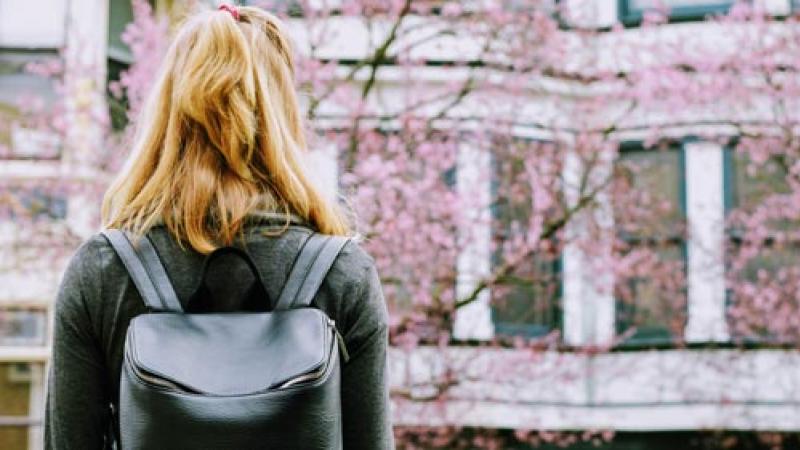 Trendence’s latest research delves into how the pandemic has impacted students’ decisions around going to university and their future careers. 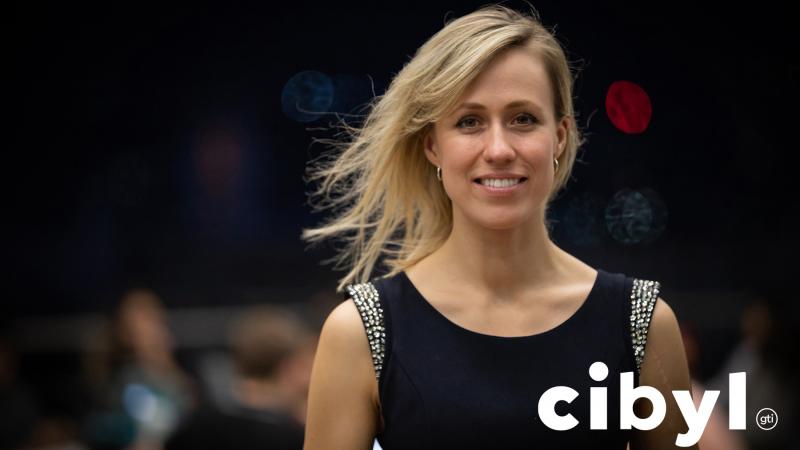 The time has come to be proactive about understanding and tackling the student mental health crisis we’re facing.